It looks like you're new here. If you want to get involved, click one of these buttons!

I thought I'd share my latest race report. Not least because this race featured our Andy R in his first road race. With the good numbers our chaingang has been seeing, and good turnout at our Grass Track event, I'm sensing a possible renaissance in numbers for the club's road racing fraternity...

The Full Gas Summer Series at the Lee Valley road circuit features fortnightly crits for Masters (aged 40+) racers. It’s all inclusive: all categories: E1234. So you can get ex-pros turning up. And, you can get newbies. And to that, here he was: our very own Andy R, turning up for his first road race, having thought about it for some time. Indeed, with three riders, Ashwell were the dominant team of the evening as Dave W turned up as well. So, the CCA trio would take to the starting line on a warm, sunny, but a bit windier than expected evening.

I had a good pre-race routine. Got to the venue well early. First to sign on. Had loads of time to warm-up. Though I felt pretty supple anyway after a lunchtime gym class. Met up with Dave and Andy. We talked Andy through the circuit and tootled around til the start. It would be an approx 50 minute race tonight, so around 40 minutes before they show the 5 Laps To Go board.

There were around 30 out. We had a neutralised lap to get into the swing of things and we were off. The pace picked up rapidly. Indeed, the second or third lap would be my fastest recorded full lap of this course. Though, I didn’t really feel it as I was stuck at the back of the bunch and drafting loads. Not a big problem, except that I would be no good to be in any break from here.

As I noodled more to the front of the bunch, indeed, two riders popped off the front. One a top class 1st Cat. There was an attempt by a couple more to latch on, but they were hauled in. However the front two would stretch out their break to 25-30 seconds and hold us off all the way til the end. TTIng the race on road bikes at 25.7mph for 40 minutes. Impressive.

Meanwhile, back in the peloton, we get into a groove. I feel the effort is under what it was a fortnight ago when a few teams were constantly gunning for glory. Maybe the stiff breeze was taking the edge off things. It was a rare easterly. Or, sometimes, it’s just the way it is.

On Saturday, I raced the grass track National Endurance 8km race. It had recalibrated my pain thresholds somewhat. Tonight was hard in parts, but I kept thinking, this ain’t like riding a grass track bike trying to keep hold on to the front riders for five miles. So, I thought I should take my newly galvanized self up the line a bit more. Here in the top five or so riders, it’s quieter, less stressful, a little more hurty in the wind, but I will settle for that. Up here, there’s a bit of frustration by those who have more to give in their legs but are struggling to muster a break. I feel a bit like this too. Keen: but don’t want to burn matches on a futile attempt to ping off the front if it won’t stay there.

At one point, two make a go of it. I give it full beans and we become a break of three. We stutter a bit and a few others join. We have a break of maybe 4-5 bike lengths. But after a lap, it comes back again. It’s futile. This will be a bunch sprint for 3rd place downwards. But the attempt gives me confidence. I can tell I’ve hurt the bunch, but I feel OK for all the effort.

In the late stages, our Andy appears. He’d said he would idle nearer the back to find his feet. It seems like having gained confidence, he was now getting more excited about what he could do up front. It was great to have a trusted wheel to follow and I thought he was handling the bike and bunch well. To be fair, I flogged him a little bit, ‘Hold that fella’s wheel Andy! Go!’ when there was a little gap. I’d made him my domestique without asking. Andy’s style suited me. Quite TT-like smooth effort, to grind down the sprinters.

Into two laps to go and out of nowhere Dave shoots around the gap in the bunch into full-on cruise missile mode. It’s impressive. Very early, but impressive. It also drags the right side of the peloton over to his wheel to swamp me on the left. It gets me thinking that the three of us could have been more tactical. You can be quite smart with three riders if you want to have a plan. Next time, maybe we will hatch a strategy. As it was, Dave’s bullet sprint helped me as it served to keep the tempo high. Eventually, I squeeze into a gap on the inside and find myself back in the top seven or so riders as we enter the last lap.

I know I need to go long. The front guys ease back a little, but I shout to them that this is it and we mustn’t risk getting swamped. Just as the rest of the peloton begin to creep either side of us, the front riders respond and we re-find full gas and string it out again. Andy slides back a little. Maybe he’s burned up too much. Maybe finishing back in the bunch is mission accomplished. The last half lap and I get on to Jess’s wheel. Jess is a strong rider who doesn’t ride for a team: who I know finds a good line and always places pretty well and who I know I can hold the wheel of. I’m feeling good in the last quarter of the lap. Unfussed by the bunch behind and able to give it full power. We crest the hill turn, to head for the line. I can see the front riders hug the left side of the road, making it clearer on the right for me. I choose this line: I’ll take a lower position in the finish if it means a safer dash. That’s a good deal to me.

It’s showtime. We enter that gallop moment of light-headed utter metabolic redness that’s completely unsustainable, but only needs to last 10 seconds anyway. We are wide across the road. I’m holding my place. I take one guy over. There’s a good guy on my right but he’s struggling to take me. He makes me go harder. I’m not giving in. I risk a gear change. If it clunks, I’ll lose precious milliseconds (we are all on transponders that measure down to thousandths of a second). Click. Phew! It’s a smooth change: I can find more power. I’m closing the gap on the leaders: the sprinters are fading.

Another 50 metres and who knows what could have happened. As it was, I zoom over the line 7th in the bunch sprint and so 9th overall. Happy with that. Nice to get rewarded with a BC point for the effort. One guy weaves wildly after the line, oblivious to what’s behind. People need to concentrate after the finish. All fine though. We CCA regroup. Andy and Dave were boxed in to the bunch. All safe and well.

We unpin and return our transponders to the pleasant ladies in the Full Gas team. We get our results instantly. There’s a good mix of folk here at this series. I look forward to mixing in mid-week chain gangs with more of this series. Andy reckons the effort was a notch below our chaingang. I’d say that’s generally about right. If you are thinking of enjoying road racing but unsure: give the Ashwell chaingang a whirl. 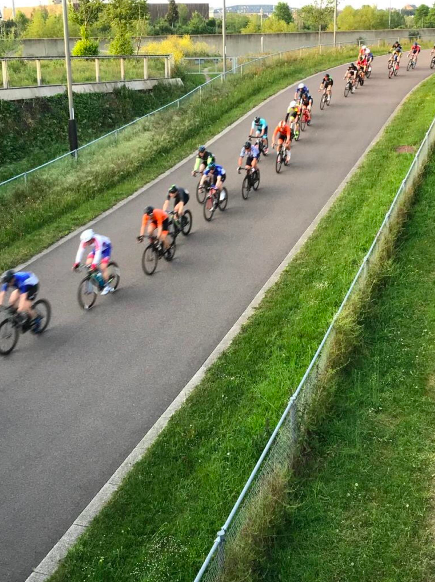